From the 4 O'clock Whistle
Thirty five people showed up to a fracking awareness seminar in Deer Lake on the 19th of June at the Hodder Memorial Stadium. Entitled “Facts on Fracking” the seminar presented a wide array of information on the history of the process and what is known about its potential effects. As those present learned, while some of the basic technology of fracking has been around for quite some time, slick water horizontal hydraulic fracturing is a relatively new phenomenon.
For example when companies assert that they have been conducting hydraulic fracturing since the 1940’s they are referring to vertical hydraulic fracturing. Horizontal slickwater “fracking,” by contrast, can be traced back to as early as 2002. Since much of the fracking fluid, which contains a complex mixture of chemicals (some of which are known to be carcinogenic or to have other health effects) remains underground after the process, the potential area affected by seepage into aquifers and towards the surface is greatly increased during horizontal fracturing. The fracturing could extend out as much as three kilometers, if not more, horizontally from each drill site in multiple directions, and one key problem is trying to control the fractures during the process. Several countries and states currently have moratoriums on fracking awaiting more information, as does the province of Quebec, and in many others there are growing demands for the institution of moratoriums.

The provincial government is doing a review of postsecondary education (PSE) this year, hoping to find ways to save money and reduce the deficit.  The PCs have greatly increased spending on PSE since coming to power in 2003 and tuition at MUN is the lowest Canada outside of Quebec, so there is definitely room for cuts.  But is cutting PSE smart policy?

Here are a couple of charts showing the unemployment rate according to level of education for people aged 25 to 44.  The first one is for Canada and the second is for Newfoundland and Labrador. 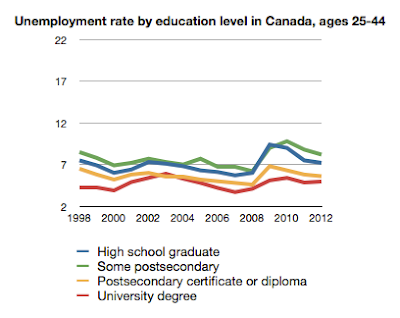 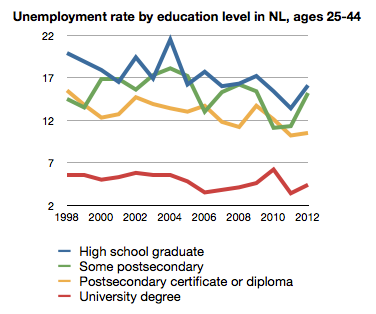 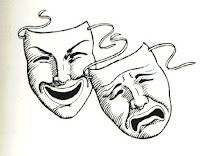 The Great Canadian Mask Ban came into effect the other day. The law doesn't mean it's illegal to mask up at a protest. But the instant the protest has been declared an illegal assembly (once the cops read the riot act) the law comes into effect. At that point, if you don't take off your mask -- bam! -- huge fines and a maximum of ten years in the slammer.


The economy in NL is booming.  The unemployment rate is lower than it has been in decades, more people are joining the labour force, and wages are rising.  But not everyone is benefiting from the boom.

The following chart shows unemployment rate by age group in the province. 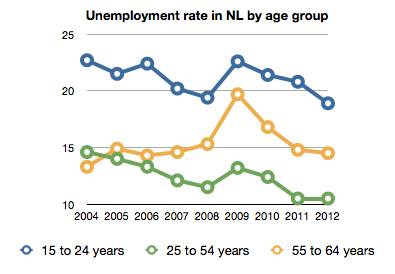 A few charts based on the latest CRA poll

From the most recent CRA poll on NL politics. The vertical axes are percent of respondents. 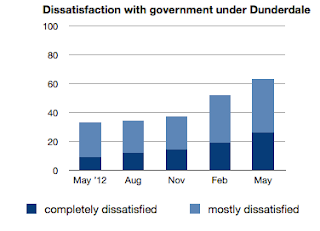