Open the House protest -- the view from the stairs 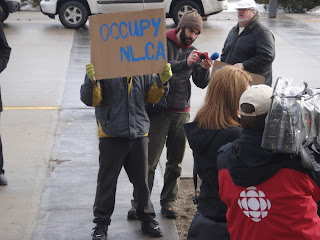 A small but vocal group of protesters came out in support of Occupy NL's rally at Confederation Building today. As part of the demonstration, Occupy NL delivered a letter to all MHAs with a list of topics we feel the house should be addressing. For more background on the rally, please see our previous posts, as well as the CBC article and the NTV video about the protest.

Today's protest (incidentally) comes on the heels of the release of the provincial Auditor General's report. In one section of special interest, titled "Refusal of Access to Required Information: Infrastructure Strategy", acting Auditor General Wayne Loveys notes that five government departments refused to provide his office with material. See also a story from The Telegram on this report.

Along with Occupy NL's rally today, another group of protesters, from the May Day Coalition, made their voices heard at the Canadian Coast Guard base in St. John's. They are angry about the looming closure of the Maritime Rescue Sub-Centre. CBC news story on today's May Day protest here. There was also a protest by CAW unionized workers at Caterpillar on Kenmount Road. The Telegram news story on CAW protest here. Quite a day for the 2011 person of the year, the PROTESTER!

Below are some images and video from the Occupy NL Open the House protest. If you have other photos, videos, stories, etc. from today's event, please send them our way. Thanks to everyone who came out today! Check back again soon to hear about more upcoming Occupy NL events... 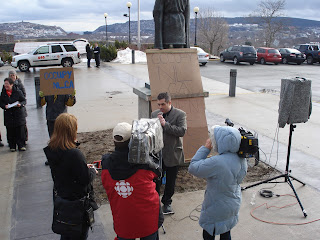 Thomas hosting the event as MC 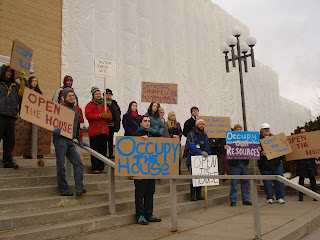 Occupy NL all smiles and solidarity on a chilly day!


A clip from a speech given by NDP MHA Gerry Rogers, discussing the Auditor General's Report. Does this seem like something that should have been said in the House of Assembly? 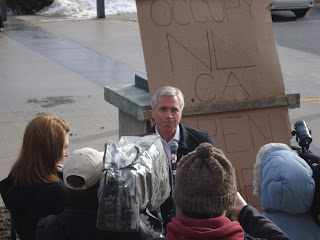 Newfoundland and Labrador Liberal Party leader, Dwight Ball, joins in the call for the House of Assembly to be opened! 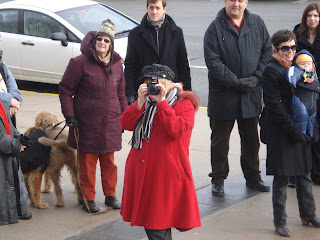 Watching you watching me... 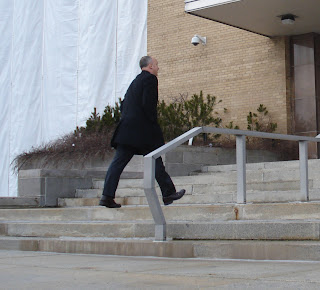 CBC news' David Cochrane sprightly striding past up on his way to the "news scrum" with the Premier. Premier Dunderdale, while being in the Confederation Building, did not deign to grace us with her presence. Perhaps her response to the issues of the day will come, as usual, on the 6 o'clock news?

Update: added link to letter sent to MHA's, a link to the NTV video of the protest, and link to CBC article on protest
at 3:47 PM

Do we have a copy of the letter to post?

Even more reason people should be demanding that the House be opened...

CBC reported that "the chamber at Confederation Building was open for debate just 33 days in 2011" and that the "house of assembly sat, on average, fewer than 45 days annually over the past eight years."

How can there be no legislation to debate?? Very appalling track record...