Population growth projections have recently emerged as a controversy. The Conference Board of Canada released a projection that the population of the province will drop to 482,000 in 2035.  Danny Williams declared the projection "bullshit" and city councillor Tom Hann also voiced criticism.

For fun, I decided to do my own projections using a very simple model under a few different scenarios.  In the models below, I assume:
* To be consistent I ignore everyone currently over 80 years old, so my population in 2013 is 507,000 instead of the actual 527,000.  This makes no difference to the projections, because 80 year olds don't have children.

Here is the chart.  The scenarios are explained below. 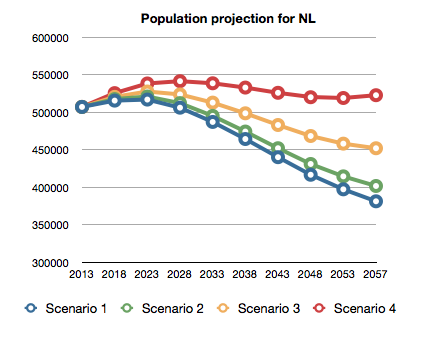 In the first scenario, I assume that fertility rate remains constant and equal to the average of the last five years. I also assume that net immigration is zero (both international and interprovincial).  I get this table:

In scenario 2, I assume that our fertility rate increases to the Canadian average and remains constant, and that net immigration is zero.

In scenario 3,  I use current NL fertility rates, but assume immigration of 1000 twenty year olds per year (actually 5,000 every five years in lump sums).

In scenario 4, I use current fertility rates but assume immigration of 2000 twenty year olds per year (actually 10,000 every five years in lump sums).

In this scenario, population is basically flat.
at 7:12 PM