Education and Inequality in Canada

I recently finished reading an economic history of the US education system, The Race Between Education and Technology by Goldin and Katz.  The main message of the book can be summarized in three points:

1) The US was the world leader in education for over a hundred years (e.g. the High School Movement and the GI Bill).  This played a major role in making the US the leading economy of the 20th century.

2) Progress in education has stagnated in the US over the last 35 years and they have now fallen behind other advanced countries.

3) The modern economy increasingly demands more highly educated workers.  Combined with 2), this has led to greater income inequality in the US, as people without advanced education have fallen behind.

This made me curious about how the Canadian situation compares to the US.  I'm happy to say that the news is mostly pretty good.  We continue to make great strides in education in Canada and especially in Newfoundland.

To begin with, high school graduation rates have improved remarkably in the last 20 years; the Canadian high school dropout rate has been cut in half. 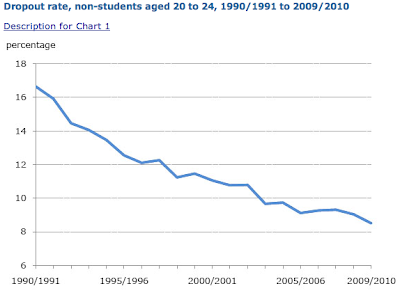 Participation in post-secondary education has also been growing, though less impressively. 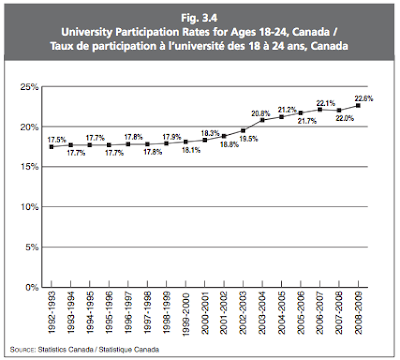 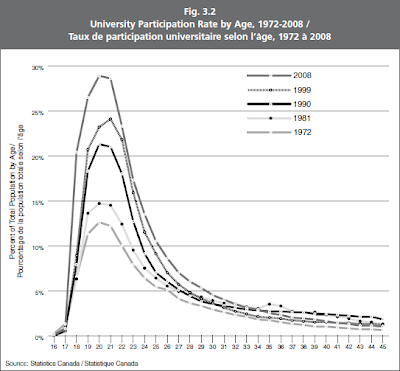 So is all this education doing us any good?  Beyond the very real cultural benefits, let us consider simply the effect on employment and income, which is easier to measure.  Education is certainly linked to higher wages 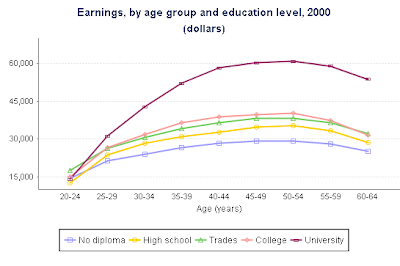 Observe that the education income premium is quite modest for people in their 20s and grows much larger with age.  These income premiums have persisted and even grown over time, despite increases in education. 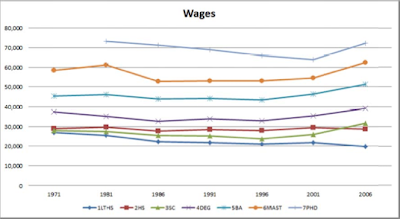 We can also consider unemployment rates according to education level.

Evidently those with more education have less trouble finding work.  Furthermore, while unemployment fluctuates with the business cycle, the overall trend in unemployment rates seems to be level or perhaps slightly down for all groups.

So how do we understand this data?  Education sceptics often say that education doesn't really make workers more productive, but simply correlates with the inherent ability of workers:  it is the smartest, hardest workers who are able to graduate and that is why they do better in the labour market.  But if this were true, then the fact that high school dropout rates have fallen so much in recent years means that employment prospects for dropouts should be dropping.  After all, it is only the least employable workers who still can't manage to graduate right?

The data does not support the sceptics.  There is no clear trend in unemployment rates and income for high school dropouts over the last 20 years.  Nor have the prospects for high school graduates diminished as more people have graduated.  This suggests that completing high school really does significantly improve the productivity of the worker "at the margin", that high school diploma is not just an empty credential, and that graduates are not simply taking work away from someone else.

Overall, the data is consistent with the view that economic demand for a more educated workforce is growing, that education is rewarded in the labour market and leads to greater productivity, and that higher education rates benefit even those with little education due to less competition for low skill jobs.

I would argue that (1) and (2) are different issues with different causes and effects, and that education rates mainly impacts type (2) inequality because almost everyone attains some level of formal education. You can learn more about income inequality in Canada here.

My reading of the data is that our terrific progress in improving high school graduation rates has been a big help in reducing type (2) inequality towards the lower end, but that post-secondary education participation has not kept pace with demand since the 90s and this is contributing to growing inequality between high school graduates and college/university graduates.

I also think that the fact that the education wage premium doesn't really emerge until a person enters their 30s provides a good argument for subsidizing university education. Young people (particularly young men) tend to discount the future and thus may pursue less than socially optimal levels of education.  If cheaper tuition will encourage higher rates of participation, then this is probably for the greater good, even for those who do not benefit directly.

What do you think?

Job prospects for young graduates is not looking good. I'm sure a lot of young people in Canada—even those with degrees—will continue to have a hard time finding work. It will only get worse from here with austerity economics...

I respectfully disagree with the previous commenter. At some point, the baby boomers will have to leave the job market and when that happens, things will change fast. There are fewer people in Gen X and Gen Y and even accounting for more women in the workforce in these younger generations, I think there will be fewer people overall competing for the same number of jobs. At that point, there will be more jobs available and they'll probably pay more as employers find they have to ante up for the best talent. Also, the economy is cyclical. At some point, austerity too shall pass.

You are quite right that this is a tough time to be entering the labour market. Those with more education are having an easier time though. Take a look at the last graph showing "unemployment rates by education, age 25-29". Unemployment jumped much more for those with high school or less, than for those with a post-secondary degree.