Updated: Who is trolling the "Dunderdale must GO!" facebook group?


This amusing exchange exposed an impostor who was sabotaging the "Dunderdale Must GO" facebook group at the centre of recent controversy. 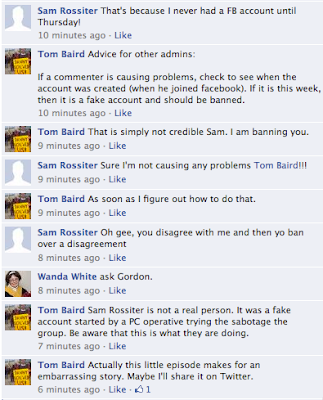 Is "Sam Rossiter" the alias of a PC operative?  Is this yet another example the PCs using subterfuge to sabotage the free expression of public opinion?  Should we regard with greater skepticism embarassing and hateful comments in open discussion forums?

I think you know my answer.

In my haste to post this last night, I failed to offer evidence that Sam Rossitter was a fake account.  These are the reasons is why I am certain that the account was fake.

The administrators of the group have modified the rules to allow admins greater freedom to ban suspected impostors and delete content contributed by suspected saboteurs. This change in policy is broadly supported by the legitimate users of the group.  I hope that people will recognize that this is being done for valid reasons and I hope that this will not detract from the interesting and genuine discussions and debates taking place in the group. (TB)

We are the common citizens of Newfoundland and Labrador who feel that the present PC government has mismanaged our fine province.

All members are free to post without needing Administrator approval but you should post items relevant to defeating the PC's in 2015. We reserve the right to remove posts that do not further the discussion of our main goal.

Administrators will remove anything hateful or threatening. Personal attacks and lack of respect will not be tolerated. Anyone engaging in that kind of behavior will be removed from the group.

Please report anything you see that violates these rules to an Administrator.

I told you Tom, our eyes and ears are everywhere!

JOKES FROM THE ROCK said...

The very fact that the PC's could even be "bothered" to troll this group tells me that what we're doing is working.

It is probably a marketing/PR firm lots of those around: https://www.google.ca/search?q=marketing+firms+internet+reputation+st.+john's

They are trying to take the onus off the real issues with their little PR fiasco last week! Lets be sure to get the focus back on the important issues at hand that this government is trying to avoid, seemingly at all cost.

Here are a few of my main concerns

The use of $105 per barrel (Brent CRUDE OIL) for the next 3 years as the price we are using to estimate our revenue!

2 MUSKRAT FALLS is the root of ALL our current fiscal troubles despite what Kathy Dunderdale and all the PC MHA's and the people at NALCOR are trying to sell to us all. Since 2006 the PC government has set aside hundreds of millions of dollars to the tune of close to $3 billion dollars CASH assets for the equity portion, 45% "equity" of the overall cost of the MUSKRAT FALLS mega project.
PLUS what they have given to NALCOR besides!

3 SNC Lavalin! Embroiled in corruption scandals WORLD WIDE, we have all just learned that Mr Riahd Ben Aisssa, one of SNC's International bad boys was operating here for 17 years up until 2008 as a member of the board of directors of BAE-SNC, a Newfoundland engineering firm. He has been under arrest since last year in a Swiss prison charged with many counts of fraud, including his part in the McGill University Hospital scandal! He did much work in Libya for his good friends the Gaddafi family, where he used his magic touch to secure billions in contracts for SNC.

If you have not heard of this then I suggest you all take the time to bone up on it a little bit! Here is a site with plenty of information www.muskratinfo.ca

*Be sure to watch the video on the Rissa Norway Landslide to get a real understanding of the type of material they have to deal with at the North Spur!

The North Spur is a "natural" feature of the plan to dam Muskrat Falls! It is composed of unstable material known as Marine Glacial Clay or "QUICK CLAY" Despite knowing since 1965 that much exploration work was required to come up with a solution for stabilization of the North Spur, the main proponents of the project, NALCOR, and SNC Lavalin have not come up with a costed out engineered fix, despite sanctioning the project.

This easily could be deliberate, as a way around addressing this 35 year old problem has been found at every turn of the planning and regulatory process. Right down to the "REORIENTATION" of the dam and power house from DG2 to DG3, which has allowed for that construction to take place BEFORE they attack the North Spur.

This is the little EXTRA SNC Lavalin has been working on getting their hands on since 1978.

If we get to the point of no return in the CONSTRUCTION PHASE it will be too late!

Its the EXTRA the NL rate payers may not be able to afford!

They need to hear us loud and clear that we are not satisfied with LIP service anymore! We want action on on the issues NOW not before its too late!

Tom, You're paranoid! Gordondale to as well! The pictures on Sams account are of an RJ45 Ethernet pinout diagram for making a cross over cat5. The profile picture is the schematic of a negitive Voltage Regulator...he stated he's a data recovery tech so that will explain the pinout for the big brother regulator as they are attached to the hard drive when the pcb voltage regulator burs out. It's a low cost way of recovering data when the drive is totally electric dead!

You guys are fucking retarded, if you spent more time figuring out your own problems instead of worrying about the government, things would be a lot better.