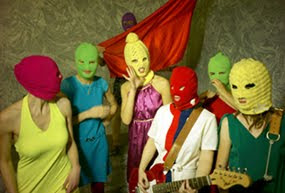 Formed in Russia in 2011, Pussy Riot is an anonymous, punk-rock, feminist collective that engages in impromptu performances that discuss gender equality, freedom of expression, human rights, and politics.

On February 21st, 2012, as part of a protest against the re-election of Vladimir Putin as President of the Russian Federation, Pussy Riot performed their song "Holy Shit" (a punk rock prayer) in a 'priests only' section of the Cathedral of Christ the Saviour in Moscow. Less than one minute into the song, Pussy Riot was escorted outside by guards.

On March 4th, two members of Pussy Riot were arrested and a third member was arrested on March 15th. While Pussy Riot says the performance was about highlighting the special relationship between Putin and the leadership of the Russian Orthodox Church, they have been charged with 'hooliganism motivated by religious hatred or hostility' and they face a potential 7-years in jail. (Update: On Aug 17th members of Pussy Riot were sentenced to two years in prison).

Pussy Riot has received a lot of international support from artists and politicians, which you can read about here. There has also been some criticism of Pussy Riot, with claims that their actions were blasphemous and that maybe they should be forced to do community service.

According to the Union of Solidarity with Political Prisoners and Amnesty International, this is much more serious than something community service could address as these women are political prisoners and prisoners of conscience.

The court is slated to make its decision on August 17th. If you're interested in following the trial, you can do so at Freepussyriot.org.

Black robe, golden epaulettes
All parishioners are crawling and bowing
The ghost of freedom is in heaven
Gay pride sent to Siberia in chains

Church praises the rotten dictators
The cross-bearer procession of black limousines
In school you are going to meet with a teacher-preacher
Go to class - bring him money!

Patriarch Gundyaev believes in Putin
Bitch, you better believed in God
Belt of the Virgin is no substitute for mass-meetings
In protest of our Ever-Virgin Mary!

All right, that's it for this installment. See you next time and, as always, feel free to make a request or make your own post!

At least it's getting a lot of attention, which is exactly what they wanted. Unfortunately, the coverage in Russia hasn't been as sympathetic as in other countries, as the government controls the media completely....