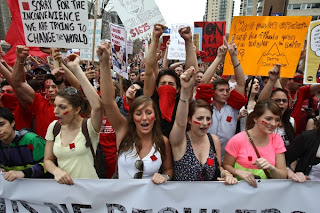 Join us for a huge Casseroles (Pots and Pans) Night on Sunday July 22 at 8 pm, in solidarity with students in Quebec and Canadians throughout this country who have had enough.

This is a demonstration first and foremost about community, joy, solidarity, togetherness, and creating a democratic space for people beyond the ballot box.

It's about building grassroots connections and meeting your neighbours. Building the revolution from the bottom up!

It's about voicing your rejection to the policies of the federal and provincial governments that have repeatedly made us the greatest embarrassment in the global community.

It's about showing solidarity with the students, professors, lawyers, doctors, mothers, fathers and more in Québec who, despite oppressive tactics and egregious propaganda by the Charest government and the complicity of the mainstream media, have courageously taken to the streets every single night since March 22nd of this year.

On Sunday, July 22nd, Québecois will take to the streets to celebrate five months of resistance. Over 125 simultaneous demonstrations in solidarity will be taking place around the world!

Here is a great explanation of the context for the current mobilisation of students in Quebec. Free education is not a new idea, neither is it impossible. In fact, "it was the state’s very own idea on the recommendation of a Royal Commission, a choice that was respected and prized for four decades."

WHO: you and me (and hundreds of thousands of others across Canada and the World!)

WHAT: Casseroles - A pots and pans demonstration (See: Video for inspiration. Join the fight for social justice!

Bring your pots and pans, and something to hit them with!  Wear a red square (and not just to this demonstration!)  Make a placard.

Clang your way down to Harbourside Park to meet at 8:00 p.m. Hopefully, the noise will attract others to join in!

People of all ages are welcome!

Organized by whomever  tells all their friends, family, neighbours, and co-workers; forwards this e-mail to all their contacts; invites all their friends on Facebook; tweets about it (hashtag #CasserolesNightInCanada), and shows up.